Corned beef in a tin was war rations when fresh beef was not available.  No one really eats it unless the Germans are bombing do they?  Or on Nelson's ship during the battle of Trafalgar.

Corned beef sandwiches.... sitting on the beach with Mum, Dad & my sister, slight drizzle, cold breeze, after a dip in the refreshing near sub-zero sea:Lovely.   Yes, it really was lovel 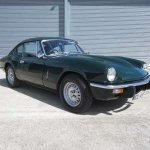 you must not be British.